It's the weekend before Halloween and you still haven't decided on a costume?

Fear not my fellow procrastinators!
I have lots of cheap and easy ideas for homemade costumes for you!

They are all fun ideas for adults or kids and usually work for either gender.
The ones we made cost less than $20 each using items we had on hand or were purchased inexpensively at thrift stores or other bargain stores.

Bunny & Mouse
My girls' costumes were made using inexpensive sweatshirts and sweatpants, felt, headbands and a glue gun.
We painted on some pink noses and whiskers and had comfortable (and warm) costume for a chilly Halloween that year. 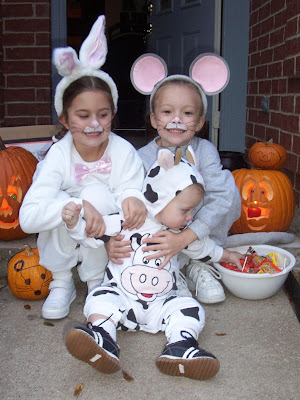 Sock Hop Sweethearts
My daughter had a school Sock Hop so we reused the poodle skirt and baseball style tee we had purchased for Halloween. 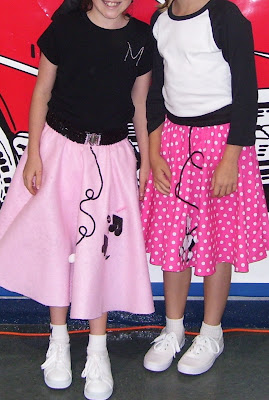 Need a boy version?
How about a James Dean costume?
Try dark jeans cuffed once, a basic white crew neck tee, a red jacket and some slicked back hair.
Add loafers or black converse and you've got yourself a heartthrob! 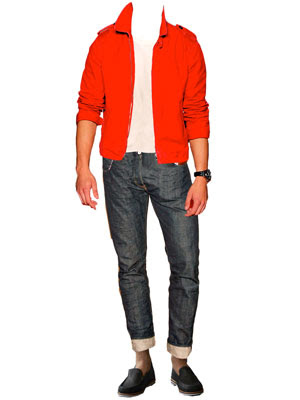 60s Go-Go Dancer
This is one of my daughter's favorite costumes ever and most of it was purchased from the thrift store!

We bought the purple sparkly dress at a thrift store along with some tall black boots for less than $10 total.

The boots were spray painted glossy white*** and we added a plastic silver sparkly bangle bracelet, large white hoop earrings and a red pleather newsboy cap we already had.

Top it off with some blue eyeshadow, Bardot eyeliner and shiny light pink lipstick.

***Note - the paint on the boots began chipping off early in the evening so if you're going to spray paint some boots, you might want to prime them first! 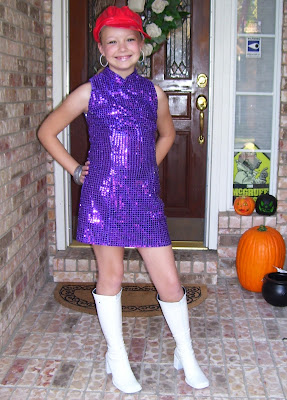 Scary Doll
I loved this idea that my younger daughter came up with one year.


She used chunky black boots and a black dress she already owned.
Then we pinned tons of large safety pins all over the dress.

We bought purple and back striped tights and purple mittens and we cut the fingertips off.

She put her hair in pigtails that she teased and sprayed to be really big.
We added gothic 'doll' makeup by using black eyeliner to draw on some fake 'lashes', a doll 'smile' and some face 'stitches'. 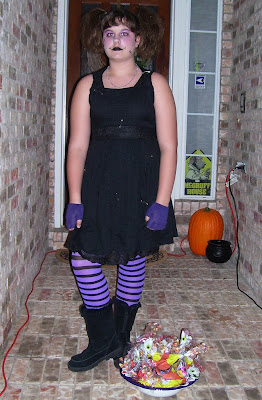 Gangsta'
Perfect for when you have about 5 minutes to come up with a costume for a party
(and you're feelin' like a G.)

Jeans, white top with a flannel shirt over it (button the top button or two for true authenticity), a bandanna around the forehead, black shades and a chunky gold chain and some watches or other 'stolen bling.'

Word to yo mutha', shawty! 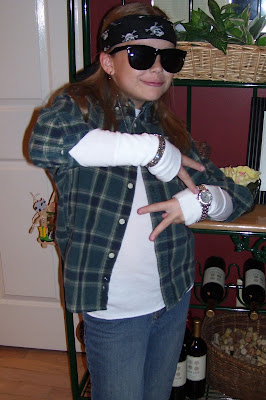 Grab your husbands worst shirt , smear some shoe polish on for stains, cut off some jeans, throw on some mismatched shoes (I like this look of one loafer and one golf shoe), grab an empty can and make yourself a cardboard sign to hang around your neck.

(You wouldn't believe how much money this guy made at the party he wore this to!) 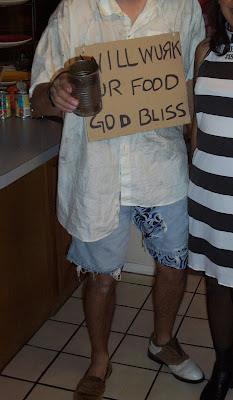 And check out this kid version (he has mismatched shoes, too!): 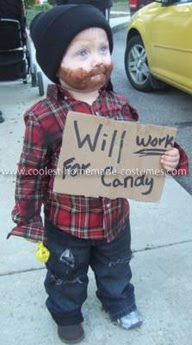 Need it in the girl's version?
Check out these Bag Lady costumes: 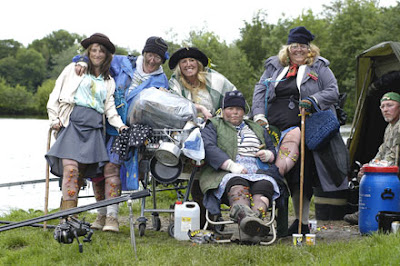 ZOMBIE
Zombies are the new 'popular kids' (Vampires are old news, folks) and one of the easiest and cheapest costumes we've ever made!

We used my husband's old white t-shirt and my son's old jeans that we shredded, ripped and smeared with shoe polish and fake blood.
Then we applied zombie makeup, stuck on a bloody knife-through-the head headband and we had an instant Zombie!

This year my daughter wants to be a PROM-BIE.
I'm thinking thrift store prom dress, shredded, dirtied and bloodied and some cool Zombie makeup. 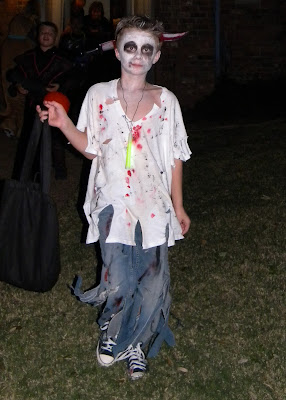 Old Codger
I loved this adult costume that we saw at a party several years ago.
He even talked like an old guy which may have been partly due to the bubba teeth he was wearing.

You can get everything he's wearing at a thrift store (or grandpa's closet) and can find bubba teeth and fake thick eyeglasses at a dollar store. 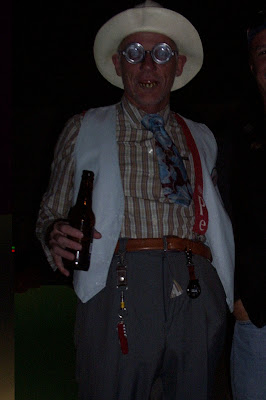 Need to make it a couples costume?
How about this Crazy Cat Lady costume as seen on Pinterest?

Pageant Contestants
Not your standard beauty queen but a 'Queen' nonetheless.
(My apologies if any Canadians were offending during the making of this post!) 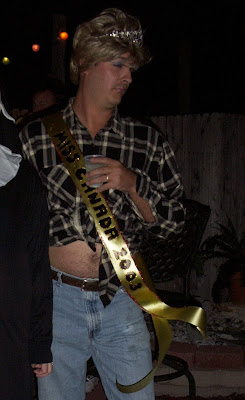 And my pageant contestant costume one year...

The key to this one is stuffing your bra really big to get that screwed-on boobs look (balloons would be great, too - the bigger the better), giant red lips drawn on and filled in, mascara running down your cheeks and REALLY big hair! 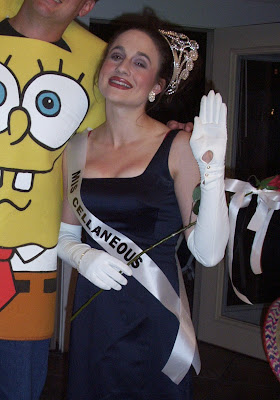 Nerd
Get the look with glasses taped in the middle, suspenders, Star Wars tee (or some other Sci-Fi or video game themed tee), plaid skirt (or pants pulled up really high to show off ankles), goofy hair, and crazy socks.

For a boy nerd, a button up shirt, bow tie and a pocket protector work great! 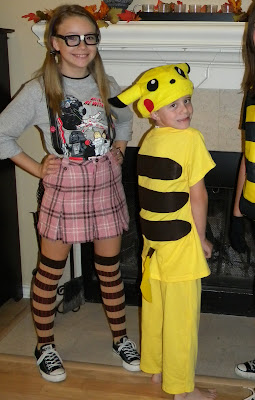 This picture also shows off my son's Pikachu costume!

We bought the hat on Ebay for about $5.  Ideally I would have used a yellow sweatsuit for the entire thing but it was no where to be found.  So, I used a yellow tee shirt and some brown felt to make the back stripes and the lightning bolt tail.  I had to make the yellow pants myself because I couldn't find yellow sweats.

Snowman
This one was such a hit that after my oldest daughter wore it, my younger daughter chose it the following year.

We found the top hat at Hobby Lobby in the Christmas decorations and added a red satin ribbon around the base.

I used a really large white sweatsuit and fabric glued black felt 'blobs' that were cut out to look like giant pieces of coal.

We made a carrot nose out of orange foam and string or elastic to hold it on.
She added a scarf and boots she already had to top it all off! 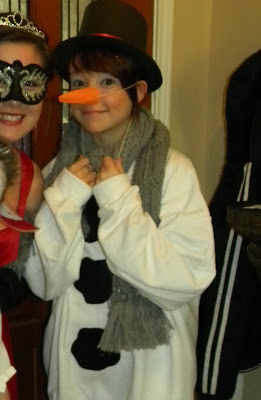 Can you guess what this costume is? 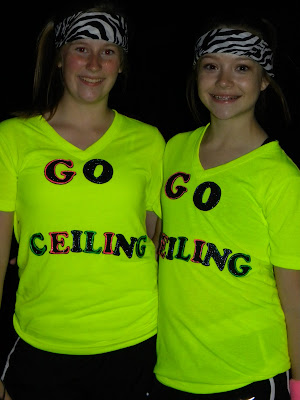 Ceiling Fans
Works best if you can scramble up some cheerleading skirts and pom poms to add to your 'Go Ceiling' tee shirts.

What kind of clever homemade costumes have you or your kids worn?

Cortney
I'm Cortney. I make stuff, I do things, I write about it.

Stuff I Already Wrote About